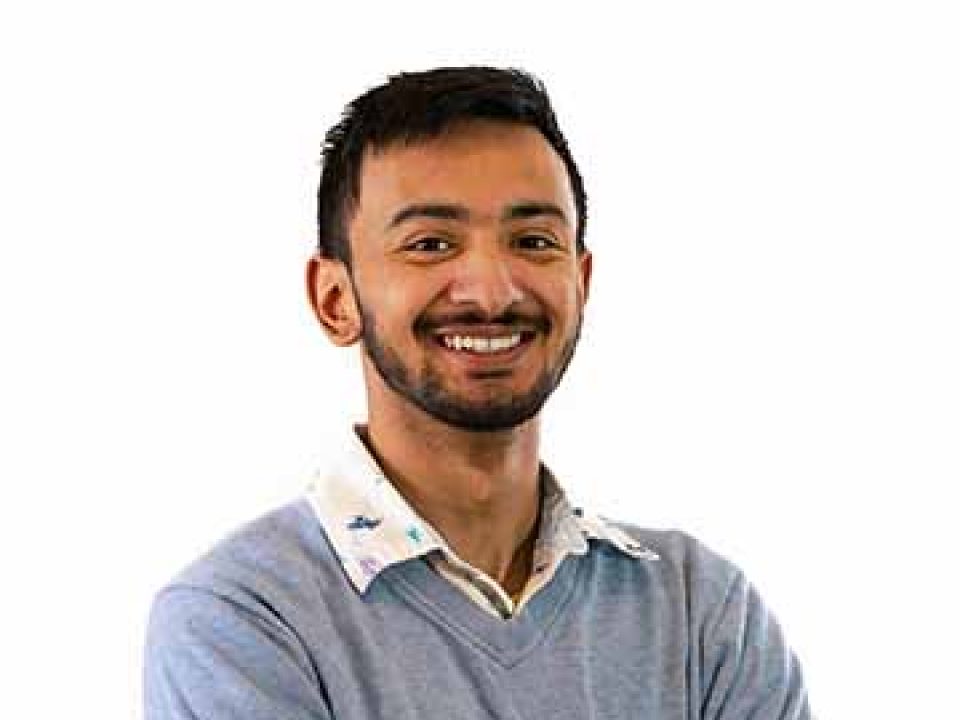 Abhishek (or Abhi, as everyone calls him here) is an artist from Kathmandu, Nepal, who works primarily in digital media. Graduating with a Bachelor of Fine Arts degree with a concentration in Graphic Design, he chose to go this route because of his long-standing interest in being a part of the interactive media scene and the video game industry. Even though he didn’t pursue art as a career at first, he always had a keen interest in design and design concepts after being taught photoshop at home and engrossing in whatever pop culture seeped into Nepal. He eventually made it to the United States and became a part of the SUNY Oswego art department, taking mostly digital classes but also enjoying studio classes here and there. In college, he managed to earn awards like the Al Bremmer in the 57th Juried Art Exhibition and many others throughout his college career. Having worked prior to college in the design field and having kept his passion for the video game industry and the interactive design field, he hopes to keep pursuing his dreams of working for a large studio and eventually leading a team and creating his own video game his undergraduate degree.

I first learned how to some of the Adobe programs when I was still in Middle School. I don’t remember doing anything serious on them, but it was always a welcome break from the very STEM-focused school curriculum back home. I used to think I was a scientist at heart, but I’ve come to terms that I’m more suited for the arts and that I could still indulge my curious scientific side with my art. I’ve found that my art has allowed me to look at the world very critically and learn to live with its more unsavory sides. “Art is propaganda” was one of my first quotes I had heard about art, and I like to think that it has and always will be propaganda for progressive change. I am very thankful to all my professors and friends for encouraging me to put that into shapes, colors, and motion and to be able to question everything through art. 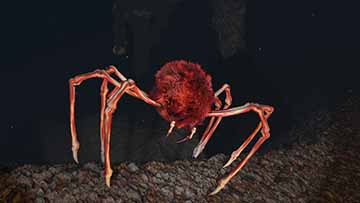 Speculative Zoology-Tufted Voidwalker
Digital 3D Render
1920 px x 1080 px
2020
ART 318
Deep underwater with rigged landscaped and smoking vents in the distance. In focus is a 8 legged crab like creature with the central mass covered in red hair. The legs are speckled red and cream color. 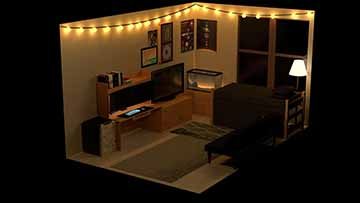 My Room
Digital 3D Render
1920 px x 1080 px
2020
ART 318
A cuboid room with two walls. There is a large 4 pane window on the shortest wall. There is string light towards the top part of the wall, various posters and a frame is on the walls. A bed, a futon, two dressers with a TV and a tank, a fridge and a table with monitors and computer peripherals is in the room. Two carpets sit on the tiled floor. 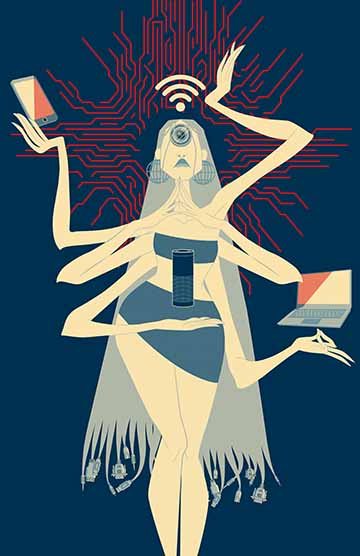 Tech Goddess
Digital Illustration
26 in x 42 in
2019
ART 307
A yellowish figure with 6 arm stans in the middle of the image with elongated arms. She’s holding an alexa, a laptop, a phone and a wifi signal as a crown. She’s wearing a tunic made out of binary numbers and her hair is made out of cords 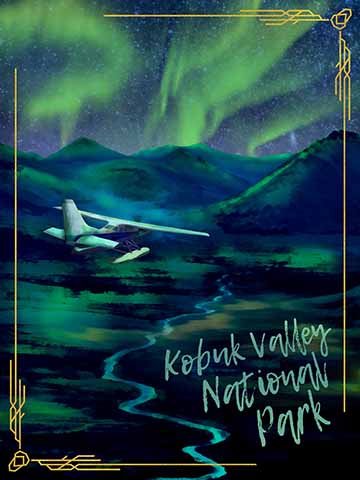 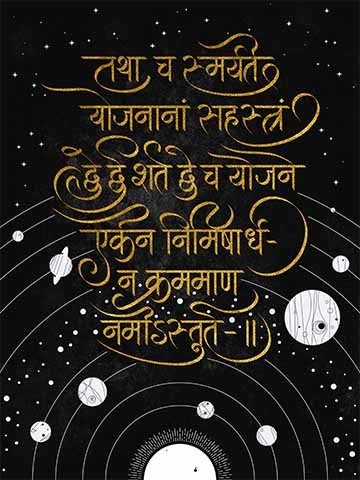 Vedic Runes
Digital Illustration and Calligraphy
18 in x 24 in
2021
ART 414
The text “It is remembered here that Sun (light) traverses 2,202 yojanas in half a nimisha.” is written in the vedic language. It is surrounded by minimalistic sun, planets and pluto along with visible orbits. Stars also surround the text.

Loop 1
3D animation
1920 x 1080
2021
ART 509
A paddle hits a golden ball and it rolls down from a green marble stand through steel tracks through a white marble tunnel. It goes through a wooden track upto into the stand and upto the top again and the video loops.

What my head looks like
3D Animation
1920 x 1080
2021
ART 509
A rusty dipping bird toy  is going up and down clicking the down key of an archaic computer that is going through a series of random images. 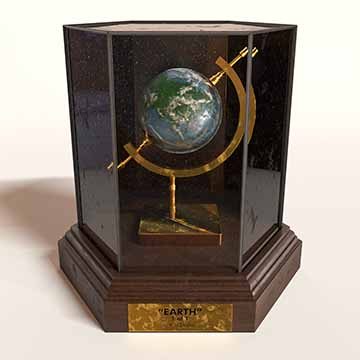 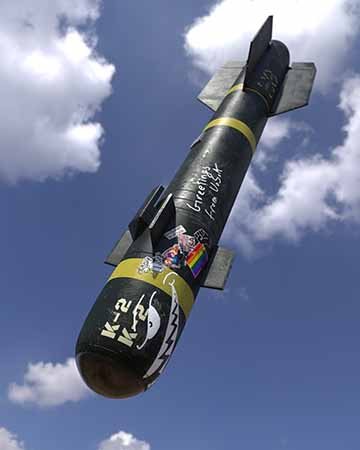 “Defensive”
Digital 3D Render
17 in x 13.6 in
2021
ART 414
A commonly used tubular missile known as the hellfire missile is in the air with “woke” stickers and chalk drawings usually made by soldiers. There are some clouds in the background and the missile and the stickers are slightly worn out.

Daydream
Digital 2D Animation
1920 x 1080
2020
ART 451
A person with a straw hat, white t-shirt and shorts is floating on the water on a purple tube. The water is tropical and a giant Axolotl can be seen swimming under the water. Gentle waves bring floating letters that spell “Daydream”. Ukulele music plays in the background. 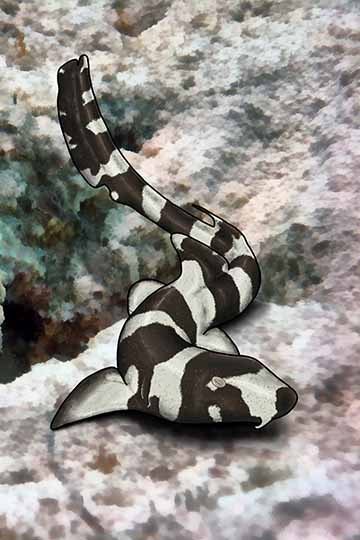 Bamboo Shark
Digital Illustration
1080 x 1920
2020
A bamboo shark can be seen on corals. It has brown and white stripes and is outlined for its specific style. 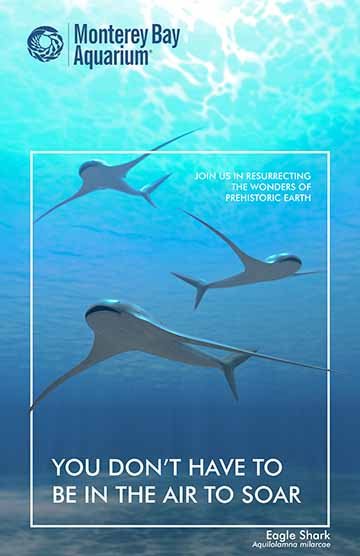 Eagle Shark Mock Promo
Digital 3D Render/Illustration
11 in x 17 in
2021
ART 414
Three Eagle Sharks are swimming in the water. They have long fins that look like wings but a tail like a shark and a wide mouth. The view is from underneath and the surface of the water can be seen. The layout is created like a mock Monterey Bay  Aquarium poster. The largest Shark is enclosed in a white line with the Monterey Bay log on the top left of the pieces. In the middle right there’s a text that reads “Join us in resurrecting the wonders of prehistoric earth”. On the bottom left a slogan reads “You don’t have to be in the air to soar” along with “Eagle Shark” and “Aquilolamna milarcae”.