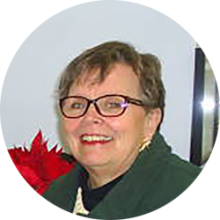 Peg graduated from Oswego State in 1965 with a BS in Education. She taught school the first year after her graduation, but stayed home to raise her children for a few years. As a single mom, Peg worked in restaurants for several years while she substitute taught. She then went to work for the county and served in five different departments – Employment and Training, Promotion & Tourism, Department of Social Services, Emergency Management, and Division of Solid Waste – over a 25 year period. Peg retired from the county in January 2003 and has been working part-time as the office manager at the Oswego County Republican Committee office ever since – over 13 years.

Peg served on the YMCA Board of Directors for 26 years, a term on the Oswego City/County Youth Bureau Board, Alzheimer’s Association Board and event volunteer, Harbor Festivals Board of Directors for 13 years, Literacy Volunteers events, Oswego County History Group, the “Light Up Oswego” City Holiday Event Committee for 3 years, and the Oswego County Historical Society Board of Trustees for 15 years – 6 years as President.

Peg received both the Leadership Oswego County Alumni and Community Leadership awards and was so thrilled by them! She also received the Zonta Woman of the Year award and was very touched by that as well.

Peg loves her “blended family” – 5 children and 10 “grandkiddles” (ages 26 to 9) and her best friend and husband, Mac! She has also loved all of the LOC Classes each year from the very beginning!